What I Learned from Running a Half-Marathon

Over the past year, I’ve added about two inches to my waistline. This is due to three main factors:

To mitigate this waistline issue, I’ve started watching what I eat (just a little) and started running again. A few years back (2011) I spent months training to run in the Atlanta Half-Marathon. I then proceeded to go about 6 years without any running before my waistline forced me to buy running shoes and get moving again.

Now that running has returned in my life, I’ve done some reflecting on that half-marathon. I wrote the following content in 2012, but I’m finding it’s more relevant now than ever.

This Thanksgiving, I chose to run my first half-marathon. I’ve always hated running, but realized I needed to get in shape. I also needed a motivational tool, so I signed up for a ridiculously long race that would force me to train if I wanted to even finish.

My goal was to finish in under 2 hours (about 9 minutes per mile) and so I trained all throughout the Fall. Running actually became a decent experience once I got in shape. I had more energy throughout the day, it was a great de-stresser, and I loved being outdoors.

On the day of the actual half-marathon I had two great friends run with me: Zak and Jonathan. Jonathan was about the same level as me, but Zak was (and is still) a crazy good runner. He could have finished the whole race in under 1 hour and 20 minutes (Just over 6 minutes a mile). But Zak, being the nice guy he is, chose to run back with Jonathan and me to keep us motivated.

I showed up to the race with an interesting mix of nerves and excitement. The first mile was great, but the course was exhausting and I quickly discovered I hadn’t prepared well for the hills. There were at least 47 moments throughout the race where I wanted to stop and walk for 20 minutes to recover some energy.

Running with my two friends made a huge difference – I knew I had to keep going or I would lose Jonathan and Zak. They both offered encouragement throughout the race and kept pushing me to keep up the pace. So, despite feeling queasy, dizzy, and having unexplained chills for the last 5 miles, I somehow made it to the finish line and met my goal time.

To illustrate the day, I found this low-quality image of the three of us. Zak is out front looking bored, Jonathan is to the right looking focussed, and I’m on the left looking ready to die: 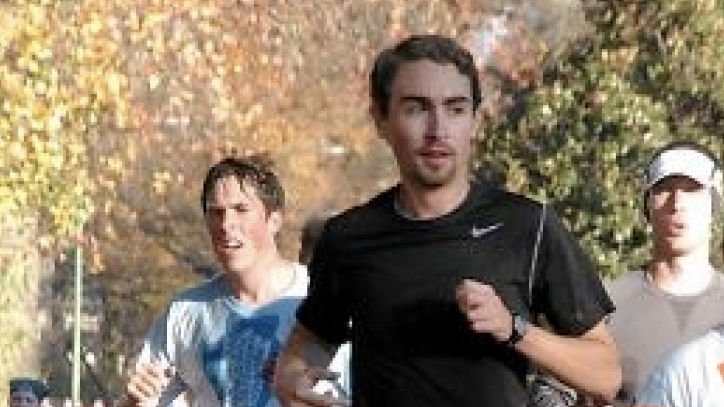 It’s easy to think you don’t need others to be successful. Knuckle down, work hard and take care of business. I think this way all the time!

The truth is, I would have finished the half-marathon even if I was by myself. But there is no way I would have finished under 2 hours. After the race I spoke with Jonathan (who edged me out in time) and he agreed, his finish would not have been so fast if he didn’t have two guys running with him.

Regardless of your goals, whether they be Spiritual growth or building a business or finishing a race, don’t attack them alone! It’s also important to remember that the type of person you surround yourself with is just as important as actually having people. Surround yourself with those who will encourage you and push you on to greater things.

Ecclesiastes 4:9-12 describes it all this way: “Two are better than one, because they have a good reward for their toil. For if they fall, one will lift up his fellow. But woe to him who is alone when he falls and has not another to lift him up! Again, if two lie together, they keep warm, but how can one keep warm alone? And though a man might prevail against one who is alone, two will withstand him—a threefold cord is not quickly broken.”

It’s not surprising that I’ve started running again because of another person. I don’t have the time to train for a half-marathon anymore, but my brother-in-law runs a 5K every month. Instead of training for longer distances, he trains for faster times. Since he has invited me along for these monthly races, I’ve found myself training again.

After 6 years of experience, growth, and life changes, I still need others. I don’t see that changing anytime soon.