How to Avoid the Echo Chamber

I learned a new term during the 2016 presidential election: Echo Chamber.

Essentially, an echo chamber occurs when you surround yourself with people who agree with you. It could be on any issue – religion, science, sports teams, food preferences, and of course, politics.

Echo Chambers have existed for years – we naturally seek out those we agree with. The Internet was supposed to connect us with new people and new ideas, but as it turns out, social media has made it easier than ever to create our own personal Echo Chamber.

See a post you agree with? Give it a like and you’ll see more posts like it. See something you disagree with? You might write a comment explaining your case, but then you’ll start to see more similar content, which will eventually annoy you and lead to hitting the unfollow button.

As time goes on, you develop a feed and network where everyone agrees with you. This creates a very polarized picture of the world, which you can clearly see if you check out democrat and republican facebook feed on the Wall Street Journal.

Four Problems with the Echo Chamber

1) You stop learning: Since you’re surrounded by people who agree with you, you never hear other ideas that might shape your thinking. You also never get your own ideas challenged, which is essential for sharpening your own beliefs. 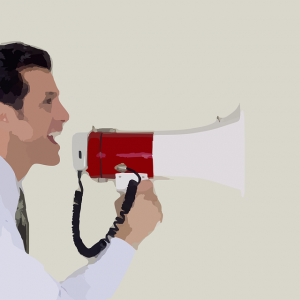 2) You begin to assume everyone who disagrees with you is stupid: I’ve lived in two places in my life, one of them would be considered very conservative and the other would be considered very liberal. Extensive conversations in both locations have led me to realize that people on both sides of the spectrum have given deep thought to their beliefs. Although I might disagree with some of them, I can’t say they’re all stupid, irrational, or evil. Embracing these stereotypes creates a dangerous divide and discourages productive conversations.

3) It encourages smugness: Once you begin to think everyone who disagrees with you is a fool, you begin to think of yourself as an irreproachable genius. You share links to show off how smart you are and receive affirmation with likes or retweets from people who agree with you. The only problem is, the countless people who disagree with you stopped listening a long time ago. Even worse, sometimes we begin to think everyone who agrees with us on one topic must be telling the truth on another, even when they’re not.

4) You get shocked by results: In both the primaries and the presidential election, people were shocked by results. How could Donald Trump win? Everyone I know supported Ted Cruz or Marco Rubio or Hillary Clinton! As it turns out, the USA has more than 100 million people who voted. This means that, no matter how big your circle of influence online and in person, there are going to be people who disagree with you. The Echo Chamber makes you forget that.

How to Avoid the Echo Chamber

I don’t shy away from political conversations, I just prefer to have them face-to-face. As an American living in New Zealand, I’ve been asked hundreds of times about my thoughts on the election and Donald Trump, and I’m more than willing to discuss the issues with them.

The benefit of talking to someone, face-to-face, is that you are forced to recognize their humanity. Politics has become so polarized and divisive that it is easy to think everyone on the other side of the political fence is a stereotype. But conversation shows you that there are reasons for their beliefs, some of them rooted in life-changing experiences or circumstances.

You would be better equipped to listen to the other person’s point of view, you would not be as smug, and you might even learn something. To be clear, this doesn’t mean that you are actually wrong – you could be completely correct. But we must be willing to listen and consider what others are saying if we want to understand them.

3. Seek people who think differently:
Friendship is easy with people you agree with. But it is also important to have friends with whom you disagree. If you don’t seek out those relationships, then they may not happen.

Once you have a relationship, ask questions! Seek to explore and understand their worldview, figure out what drives their thinking. If you are always bringing up arguments or simply maintain the relationship so you can prove them wrong, it won’t benefit anyone. So instead, listen to them, and if the time is right, they’ll ask you about your views as well.

4. Listen to Atticus Finch
The day after the election, it seemed like many people (on both sides) were angry and resorting to name calling. I had this quote in my head the entire day – it’s one of the most famous quotes from To Kill a Mockingbird and comes from Scout’s wise father, Atticus.

“First of all,” he said, “if you can learn a simple trick, Scout, you’ll get along a lot better with all kinds of folks. You never really understand a person until you consider things from his point of view…until you climb into his skin and walk around in it.”

And that’s it. An Echo Chamber teaches us to only consider things from our own point of view. If you want to avoid them, then you must climb into another person’s shoes (or skin – kind of a strange choice from Atticus, but still a great quote) and understand the world from their perspective.

And this is, in part, what Paul talks about in 1 Corinthians 9:19-23. Until you understand someone and identify with who they are and how they think, you’ll never understand their pain or their joy, and you’ll certainly never change their minds or their hearts.

The next mid-term election is 2 years away and the next Presidential election is 4 years away. Let’s start working together now to avoid the Echo Chamber and help ensure it isn’t as polarizing.

*If you enjoyed this post, then consider sharing or subscribing below to receive a free book and one new post each week